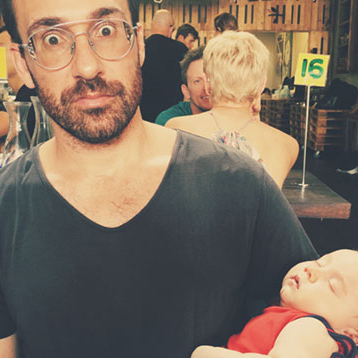 Hi there! I'm one of the fathers of Quiz Meisters, giving birth to the idea while sipping on a cocktail served in a coconut on a beach in Koh Lanta (true story). I don't like wearing shoes, I'm currently at war with the possums that live in my mango tree and kerbside collection is my favourite time of year. A producer, performer, parent and puppeteer (some would say they are all the same thing), I've helped shape all aspects of the business, but am most proud of singing the intro to Porn Star or My Little Pony. Check out my other ventures Sheepoll, Blkram Beard Oil and Tinkle (coming soon).

What do you do for Quiz Meisters?

I'm one of the CEOs and am referred to as the 'Creative Director' or 'Director of Business Development'. I head up the Brisbane team which is responsible for the creative direction, marketing and new business development. Metaphorically, I help map out any uncharted Quiz Meisters territory.

A 'mixed lolly bag' of stir fried bugs. There were grasshoppers, wormy grubs and I'm pretty sure one of them was a cockroach. It was nutty.

What’s your favourite thing to do outside of work?

Doing anything with my son, Fox. He's hilarious. Gardening, surfing, hiking, Brazilian jiu jitsu. We do it all, we just don't do it well.

Bees don't fly in the rain.

back to about us